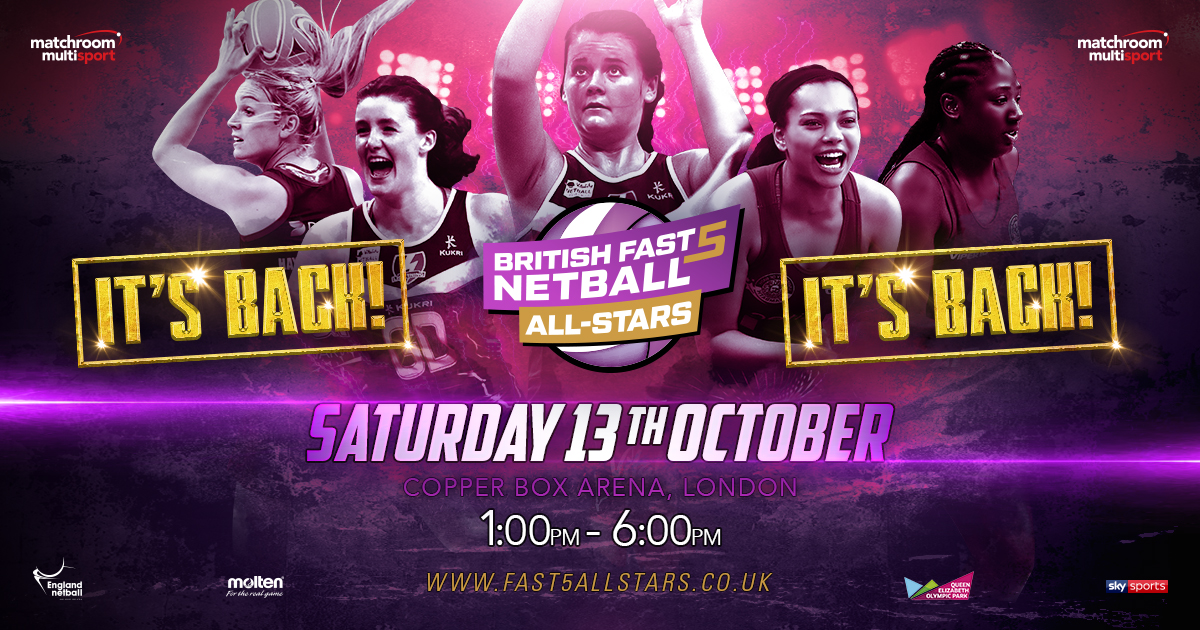 The British Fast5 Netball All-Stars Championship will return on Saturday, October 13 at Copper Box Arena, London with tickets on pre-sale from Monday, February 12 and general sale from Tuesday, February 13.

The best of British netball will again be showcased by the tournament in 2018. Defending champions Loughborough Lightning will return, to be joined by the top seven teams from the 2018 Netball Superleague.

Matchroom Sport Chairman Barry Hearn said: “The first British Fast5 Netball All-Stars Championship was a tremendous success and we are delighted that the tournament will return in October.

“Last year’s All-Stars saw Sky Sports bring in their highest ever viewing figures for netball and the feedback from those watching and the many who attended the event was overwhelmingly positive and it is exciting for netball that the Fast5 All-Stars will take place again this autumn.

“Loughborough Lightning really bought into the concept and it was fitting that one of their All-Star players Renske Stoltz collected the MVP award. The tournament is a great opportunity for Superleague teams and players to showcase their skills on a huge stage and take home a share of the record-breaking £100,000 prize fund.”

England Netball CEO Joanna Adams, added: “The inaugural Fast5 Netball All-Stars Championship was a fantastic spectacle and we can’t wait for the Superleague teams to show off their skill, athleticism and flair in the 2018 edition.

“The buzz that was created around the event shows that there is a real thirst for this format of the game and with the England Roses winning the international version in October, our fans can expect to see our players showcase the talent that took us to the top.

“We thank Matchroom Sport for their continued commitment to the sport and look forward to developing our partnership further with the second staging of this tournament.”

England Netball members will be able to access the ticket pre-sale on at midday Monday, February 12 ahead of the general sale at midday on Tuesday, February 13. Those eligible for the pre-sale will receive an email in due course.