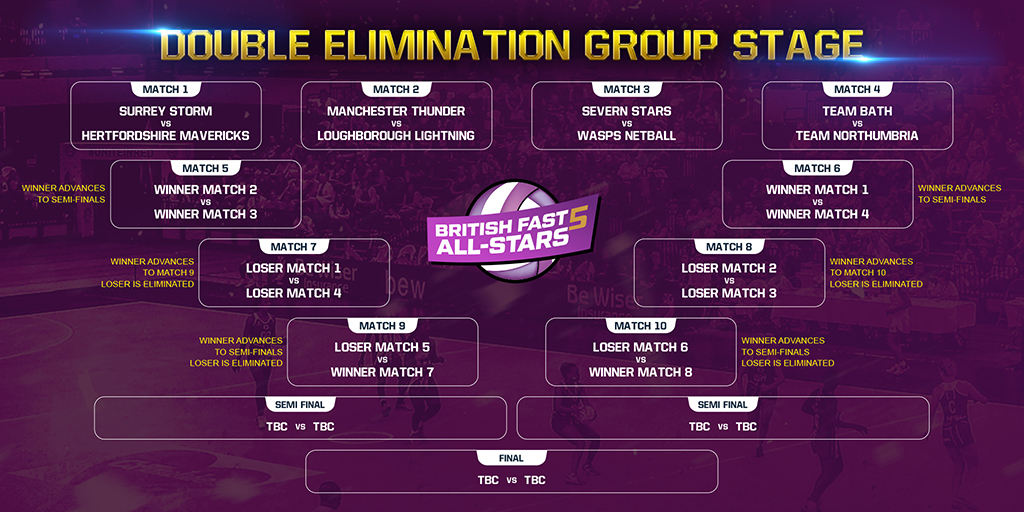 Some of netball’s fiercest rivalries are set to be revived this weekend after the draw for the British Fast5 All-Stars Championship threw up some exciting fixtures for the opening round of group games.

The tournament will open with Surrey Storm taking on Hertfordshire Mavericks, a fixture which regularly attracts bumper crowds during the Netball Superleague season. That match will be followed by Manchester Thunders vs. Loughborough Lightning as two of netball’s longest-standing rivals are paired together.

The ﬁrst round is a double elimination group stage comprising a total of ten matches, with the subsequent six fixtures determined by the outcome of the first four. Two straight wins will qualify a team for the semi-finals while two straight defeats will spell elimination. The ﬁnal set of matches in the group will feature teams with one win and one defeat competing to stay in the competition.

“It will be a massive game,” said Surry Storm’s Mikki Austin. “We play Mavericks at the Copper Box and it is always a cracker. That London rivalry will come to fruition at The O2, which will be amazing.”

Mavericks star Camilla Buchanan agreed: “We have had a few weeks training and it is fast, it is furious and it is going to be quick. We have 12 minutes to figure it out and I am really looking forward to coming up against our London rivals at The O2.”

The British Fast5 All-Stars Championship will be broadcast live on Sky Sports and carries a ground-breaking £100,000 prize fund. Eight five-player sides will compete in a double elimination group stage for a spot in the semi-finals and the eventual winners will take home £25,000.

Loughborough Lightning’s Nat Panagarry commented: “Anybody can win, that’s what is really exciting about this tournament. There is a lot of history between ourselves and Manchester Thunder so I am quite excited about the fixture already.

“There has been such a big rivalry between the two clubs for so long, and last season we came second and they came third in the Superleague, so it will be a really exciting fixture.”