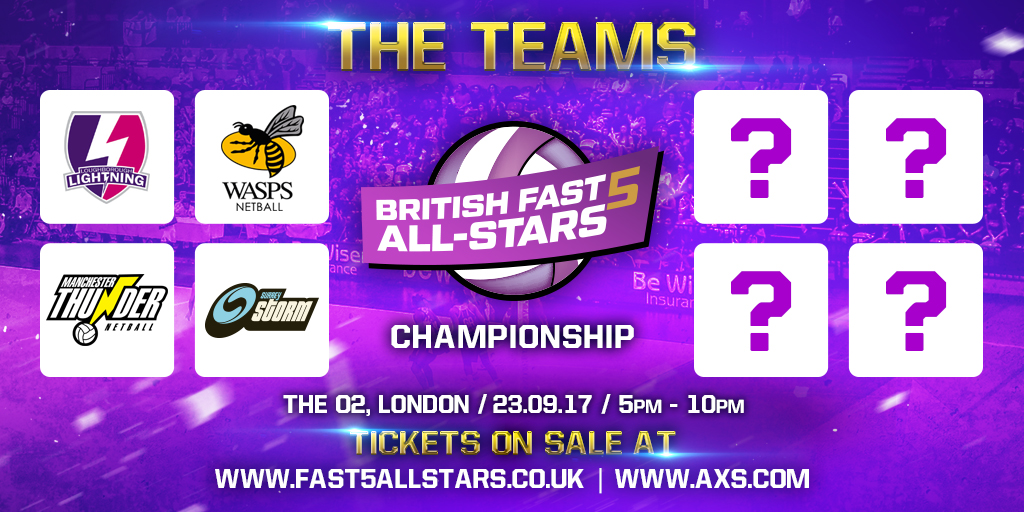 Matchroom Sport are delighted to announce Loughborough Lightning, Wasps Netball, Manchester Thunder and Surrey Storm are the first four teams confirmed to compete at the British Fast5 All-Stars Championship at The O2 on Saturday, September 23.

The current Netball Superleague top four will be joined by four more teams to be announced soon for the showpiece event in London.

The British Fast5 All-Stars Championship will see the eight five-player sides competing in a double elimination group stage for a spot in the semi-finals. The eventual winners will take home £25,000.

Matchroom Sport Chairman Barry Hearn said: “We are thrilled to be announcing the current Netball Superleague top four as the first teams confirmed to take part in the British Fast5 All-Stars Championship.

“With £25,000 on offer to the winning team we expected the most fierce competition as we continue netball’s rapid growth by bringing it to centre-stage at The O2 for one all-action afternoon.”

Tickets for the British Fast5 All-Stars Championship are available now from www.theo2.co.uk and start from just £20 with group tickets available priced from £60 for four adults. VIP Courtside tickets are available for £150 from this website