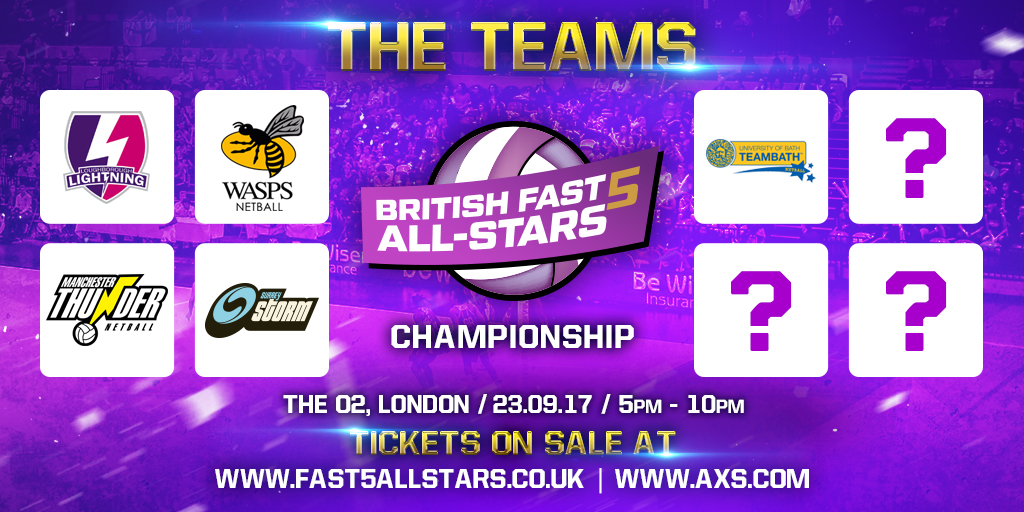 Team Bath are the fifth Netball Superleague team to be confirmed for the British Fast5 All-Stars Championship at The O2, London on Saturday, September 23.

Team Bath moved into the Netball Superleague top four with victory over Sirens on Friday evening, their sixth consecutive win. They will join Loughborough Lightning, Wasps Netball, Manchester Thunder and Surrey Storm for the showpiece event in the capital, with the final three teams to be announced shortly.

The British Fast5 All-Stars Championship will see eight five-player sides competing in a double elimination group stage for a spot in the semi-finals. The eventual winners will take home £25,000.

Team Bath Director of Sport Stephen Baddeley said: “It’s energising to see another opportunity for top netball to be showcased in a big arena. This season’s Superleague has proved just how closely matched many of the top teams have become and that makes for very exciting viewing. We look forward to taking on this new challenge in September”.

Team Bath Director of Netball Jess Thirlby said: “Our fans have shown across the season that they are amongst the best in the league. We have played in front of big audiences at home and now we’re looking forward to this exciting new venture at the O2 and hope to see that Blue and Gold army out in force and cheering us on once more”.

Barry Hearn, chairman of promoters Matchroom Sport, said: “We are thrilled to have now been able to confirm all of the current Superleague top five will take part in the British Fast5 All-Stars Championship in September.

Tickets for the British Fast5 All-Stars Championship are available now from www.theo2.co.uk and start from just £20 with group tickets available priced from £60 for four adults. VIP Courtside tickets are available for £150 from this website.

For further information about Team Bath contact: The Team Bath press office at Matchtight Ltd on 01225 384211 or press@matchtight.co.uk www.teambath.com