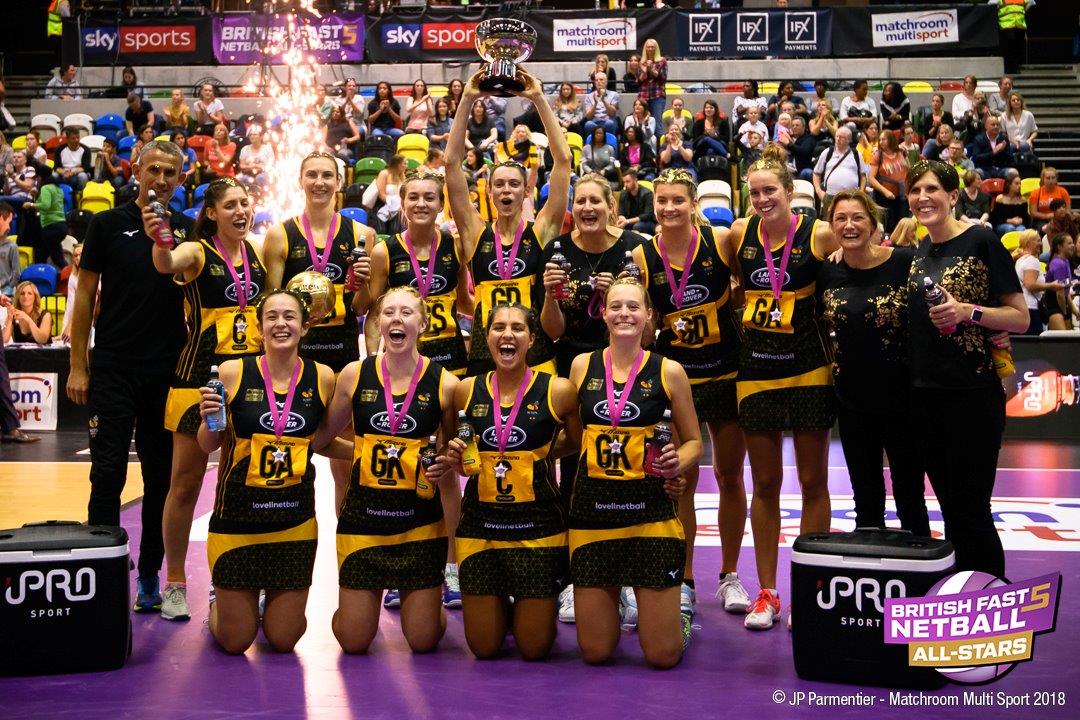 Wasps Netball won the 2018 British Fast5 Netball All-Stars Championship defeating benecosMavericks 42-32 in the final at The Copper Box Arena, London at the end of a pulsating day of Fast5 action.

MVP Rachel Dunn was a pivotal part of Wasps’ victory, nailing the long shots for a series of successful three and five pointers. She made particularly good use of the double-point powerplays with her six and ten point joy firing her side away from opponents throughout the competition.

Earlier in the day Australian legend Sharni Layton, lining-up as a Surrey Storm All-Star, kept her Commonwealth Games promise to wear the England Roses dress when she walked out in red to the delighted of the packed Copper Box.

Layton inspired her side through to the semi-finals, where they pushed Wasps close until the eventual champions edged clear in the final minutes to win 45-36, setting up a final with Mavericks who had swept aside Severn Stars 38-8 in their semi-final.

Wasps had scored a combined 123 points in their three matches prior to the final and continued to score regularly in the showpiece, beating Mavericks 42-32 to claim the £25,000 winner’s cheque.

“Thankfully my shooting arm was on fire today,” said Dunn. “It was great fun and an awesome tournament to be a part of. As the games went on I knew I was shooting well and the other shooters stepped up when needed.

Of her appearance for Storm, Layton said: “It has been such a great day. It was intense, it was fast, it was fun, the fans have been amazing and I couldn’t have asked for a better reception – it was phenomenal.

“We nearly got the Wasps but Rachel Dunn – what a shooter, she was bombing them in from everywhere. She is hard to stop.”

Played in front of a packed Copper Box Arena, the British Fast5 All-Stars Championship featured 12-minute matches, an all-star 5-point line and a Golden Buzzer Power Play as the top eight Netball Superleague teams battled it out for their share of a £100,000 prize fund.